Currently only a few languages are supported in Home Intent. We've designed the structure of the code to support multiple languages and hope that people can contribute.

Currently translating requires a bit of Docker, docker-compose, and git knowledge. We know this is a high bar for contributing, but have decided to go for it to allow Python to be fully used in the translation environment. Knowing Python is not strictly needed to help with translations, but it would be useful as translators may have to refer back to the base classes during translation.

The developing translations guide and local Home Intent development would be good to read beforehand to understand how it all fits together.

If you want to contribute a translation, feel free to create a new issue in our GitHub repository so we know who is working on it and any questions related to the translation can be asked.

To get stated with translations, you will need to pull down the latest version of the repo, and setup the config.yaml. From there you can update the development docker-compose.yaml file to set the ISO639-1 language codes in Home Intent and Rhasspy. The current supported codes are the following:

You can set the language in Home Intent with the LANGUAGE environment variable:

In Rhasspy, the command's profile argument also needs to be updated to the match the language code:

Doing this will load the different language option in Rhasspy and tell Home Intent to try and load the translated version of a component. If it can't do that it will fallback to English. This might not be the long term behavior, but is currently how it is setup as very few things have been translated.

To translate a component, in the components folder (which should exist after kicking off the container for the first time), there are component folders with en.py files. You can start by copying the en.py file to the language you are translating to (ex: de.py, es.py, etc), and going through and translating the sentencs/structures to the other language.

This is the en.py file from the Timer component. Rhasspy uses a simplified JSGF grammar for its sentence structure. This is the most complex component in terms of grammer:

These can be mixed and matched to create various types of sentence structures.

After making changes to the codebase, you can start Home Intent in the Docker container:

After it's running, you can go to the Rhasspy UI (http://localhost:12101), click on the Sentences tab and select intents/home_intent.ini from the file dropdown to see the sentences and Slots tab to see any language specific slots. 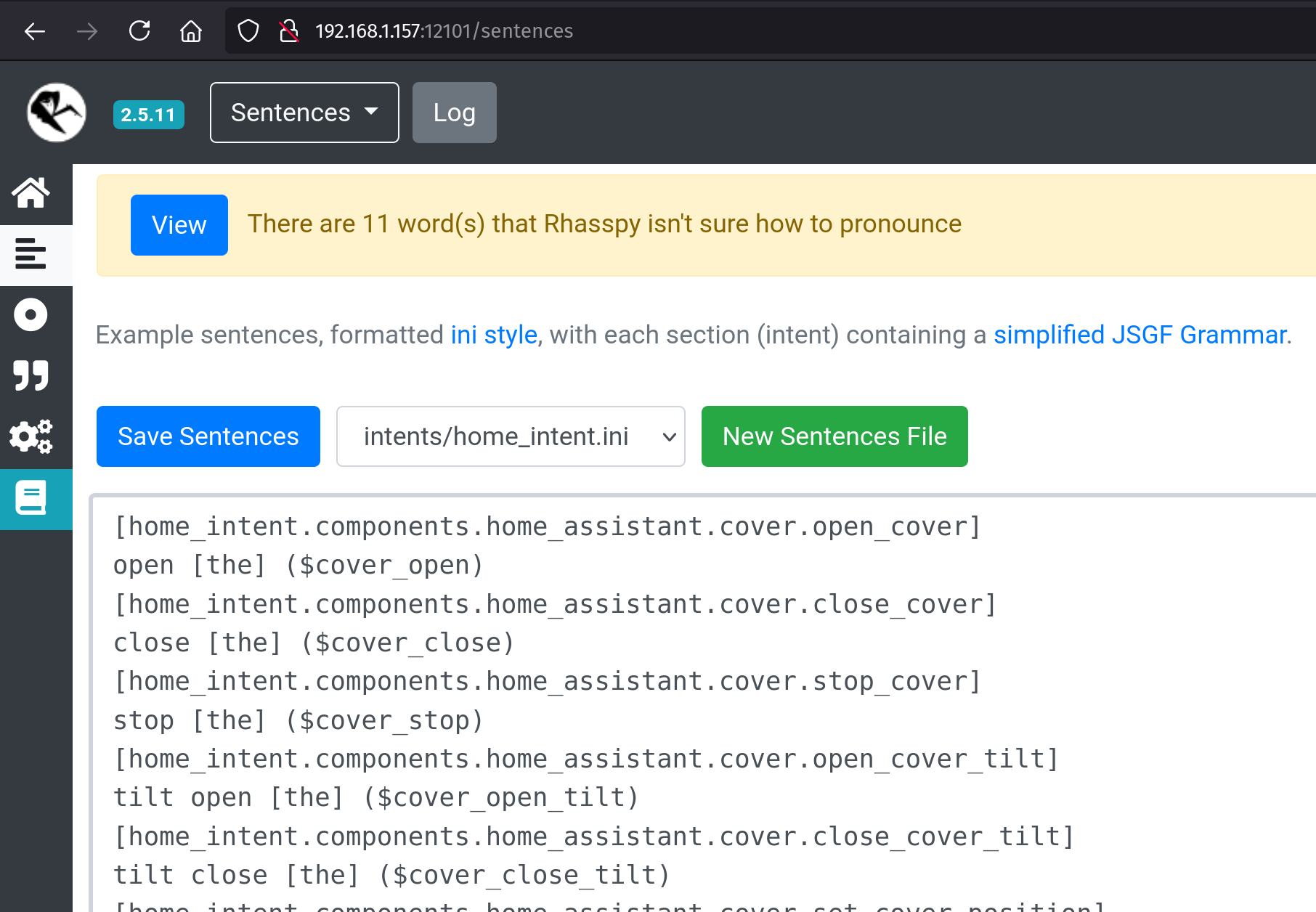 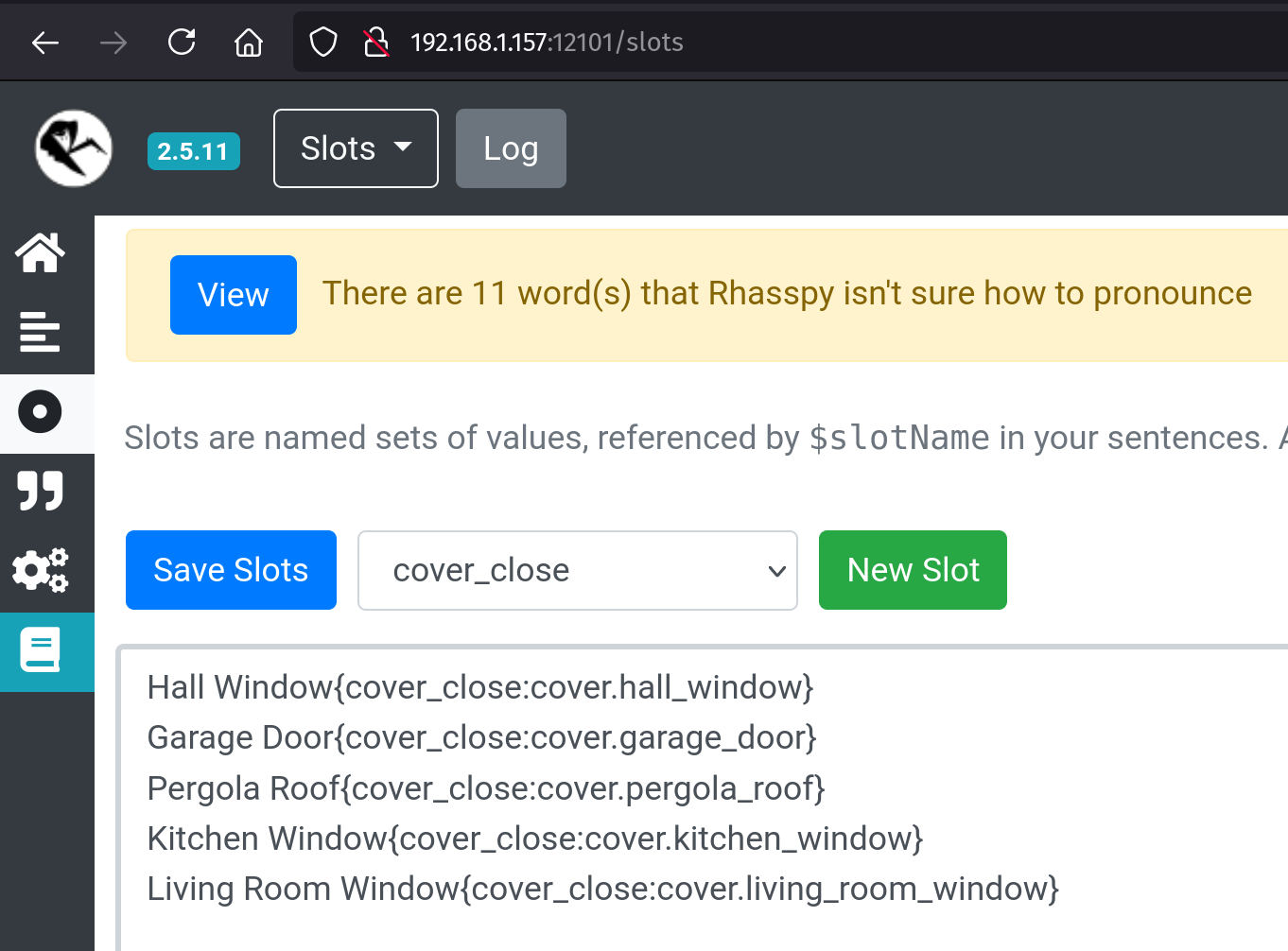 From there, you can verbally test the translations and see how well they work. If changes are needed, you can stop running Home Intent with ctrl+c, make further changes, and start the container again. Once they are working as expected, the files can be Pull Requested back in, and we can work on getting it merged!

We always want to keep Home Intent working well and feeling professional, so we have some considerations that might help.

In English all the sentences try to start with verbs ("Turn on the kitchen light", "Set timer 5 minutes", "Open the garage door", etc). The main idea behind this is to have a sentence structure that is consistent across all types of intents and makes the sentence usage "guessable". So the idea with any of the translations is that once folks understand the sentence structure, they should be able to guess all the variations without much effort.

Understanding the on/off types of issues

One of the issues we run into in English voice recognition is that "on" and "off" sound very similar and mean very different things. To get around this, for (at least) Home Assistant, there's a prefer_toggle setting that toggles instead of directly performing the action that was requested. This gets Home Intent to perform the correct action even if it misheard the sentence.

I'm sure this will affect other languages. If they follow the prefer_toggle convention, they can use it. But if another language quirk causes "system confusion", please put an issue into the tracker so we can work to resolve it.

I'm sure while translating we may come across other language considerations that can be used to further improve the quality of Home Intent. Feel free to start a discussion or open an issue to discuss. We'd love to hear about it!